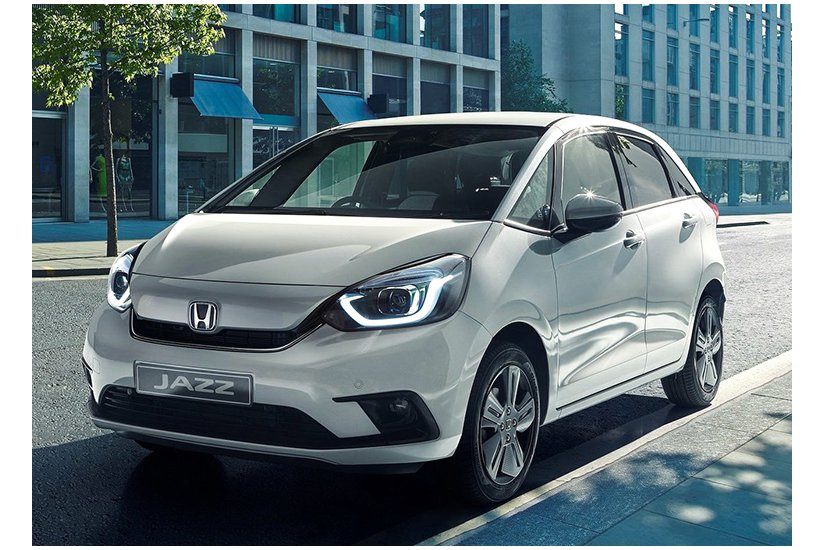 The all-new 2020 Honda Jazz gets a thorough styling overhaul and a connectivity upgrade, but keeps its trademark practicality and tall seating position. There will be two body styles this time round – the ‘regular’ Jazz and the more rugged-looking Jazz Crosstar, which is expected to compete with the Ford Fiesta Active. 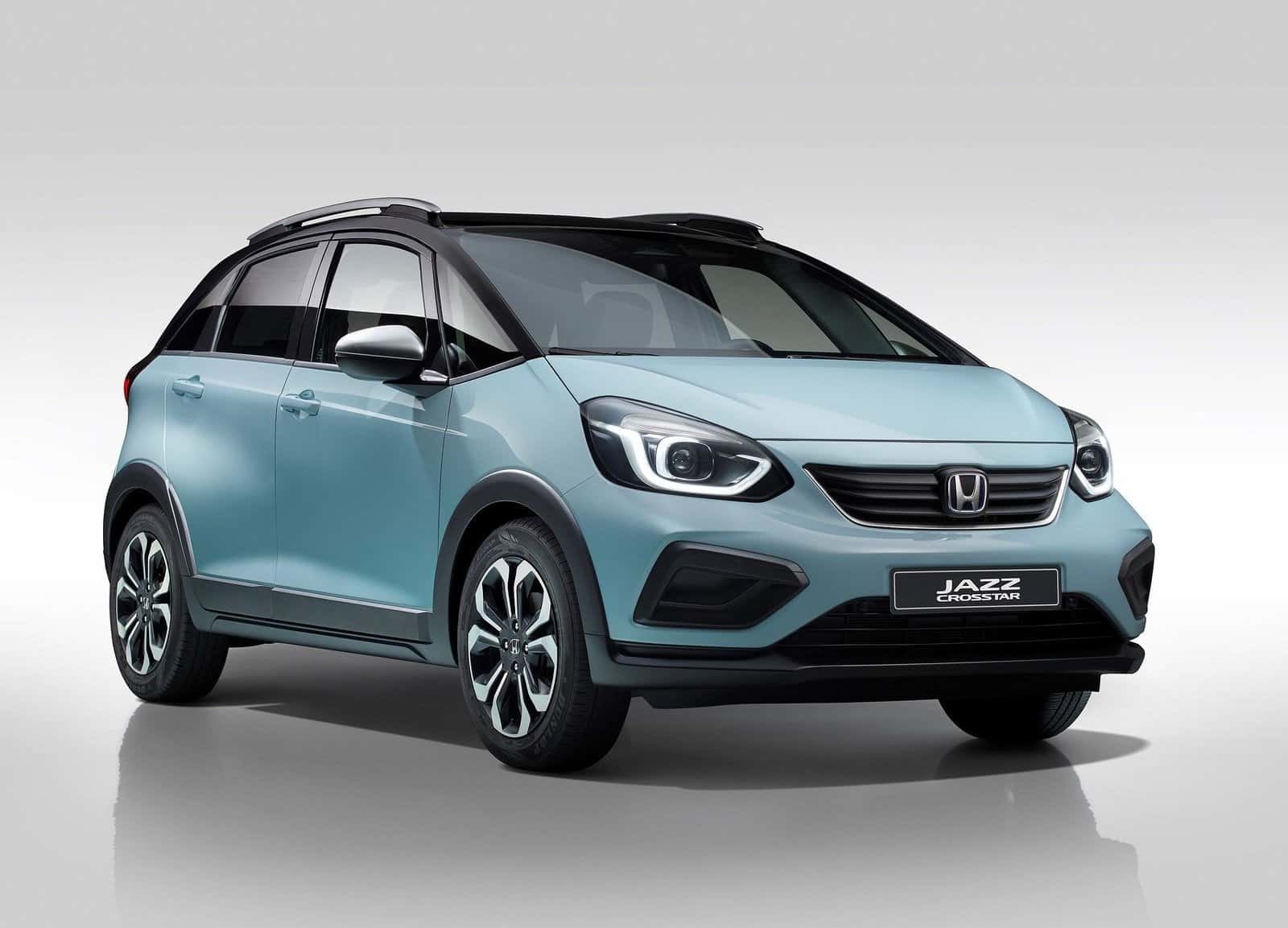 Both will go on sale in the summer and for the standard Jazz, there are expected to be a range of new trim levels and options from which to choose. The Jazz Crosstar is expected to be its own, stand-alone trim grade.

A Jazz hybrid is nothing new and has previously been available. However, for this new model there’s no other option. A 1.5-litre petrol engine is mated to two compact electric motors and a small battery and in total the system produces 108hp. That may not sound like much, but the Jazz can accelerate from 0-62mph in a very respectable 9.4 seconds and go on to a top speed of 108mph. 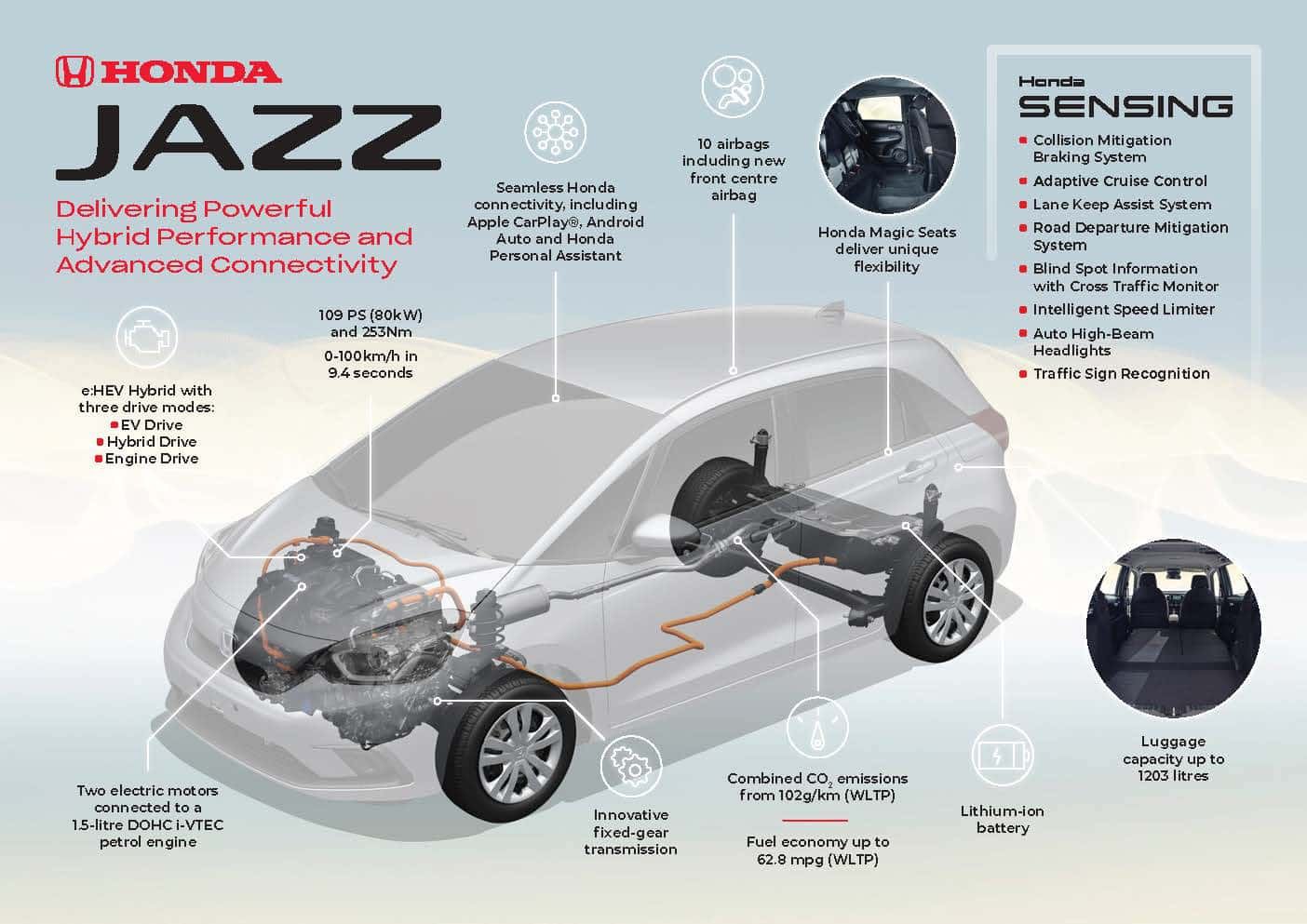 As a self-charging hybrid, you don’t have to plug the Jazz in to recharge the battery and the electrical assistance mainly works to boost fuel economy. Apparently, you can expect up to 62.8mpg from the standard Jazz and 58.9mpg from the Jazz Crosstar. Three driving modes are present, letting you choose whether the car runs on petrol, electric or both.

Like most hybrids, both versions of the new Jazz are available as automatics only, but not via a traditional torque-converter automatic gearbox. There’s a single fixed-gear ratio like you get in an electric car, which is smaller than Honda’s CVT gearbox deployed in other models and promises smooth, seamless acceleration. 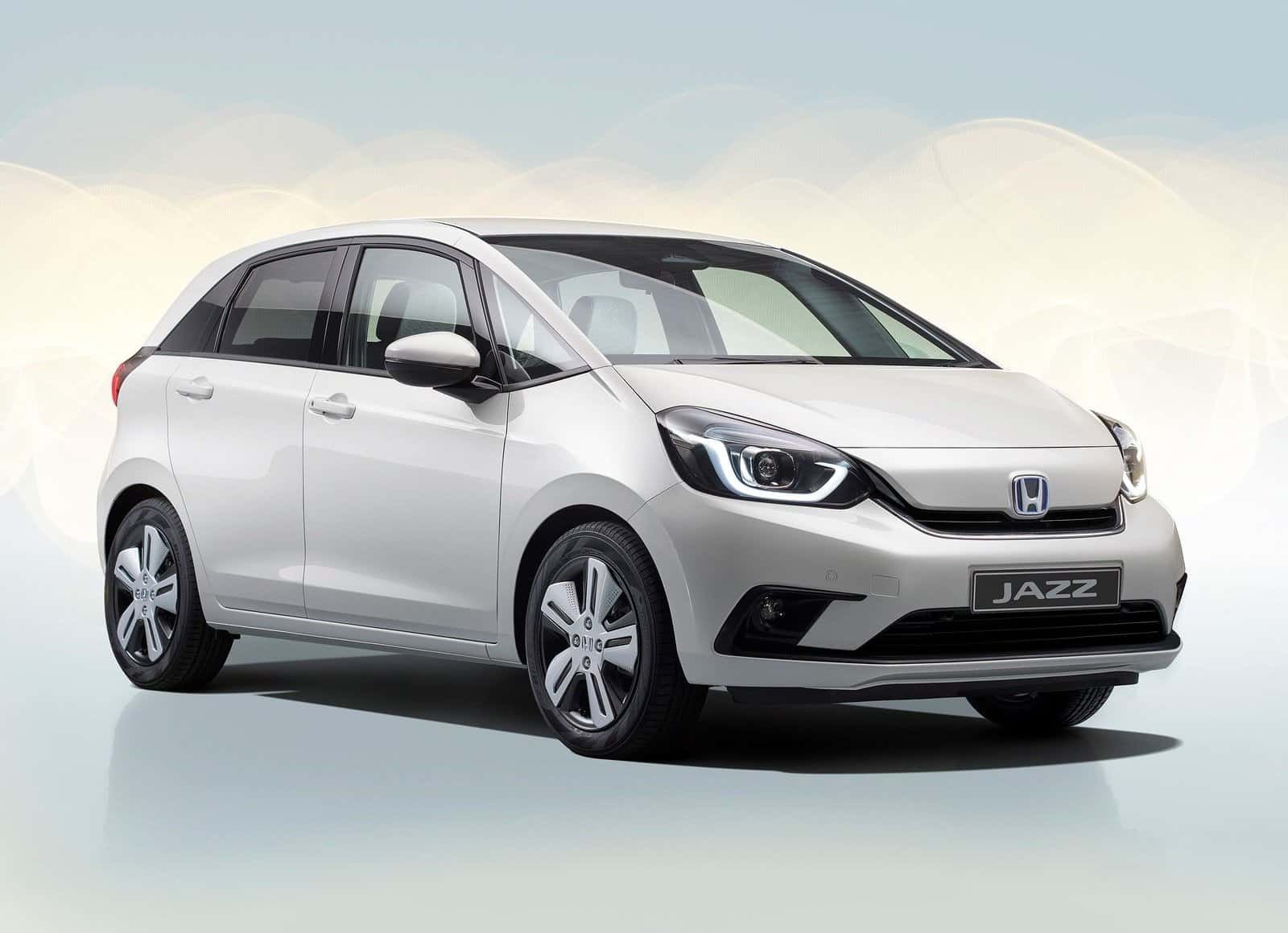 The fourth-generation Honda Jazz will retain its tall, mini-MPV looks. The front end includes new headlights with LED elements and a blanked-off grille panel, highlighting the hybrid powertrain. Underneath, the front bumper will get slightly different air vent designs depending on the trim level, while the rear end has been similarly redesigned. The faux-crossover style Jazz Crosstar will be offered with black plastic body cladding, a black roof, a proper grille and silver roof rails. 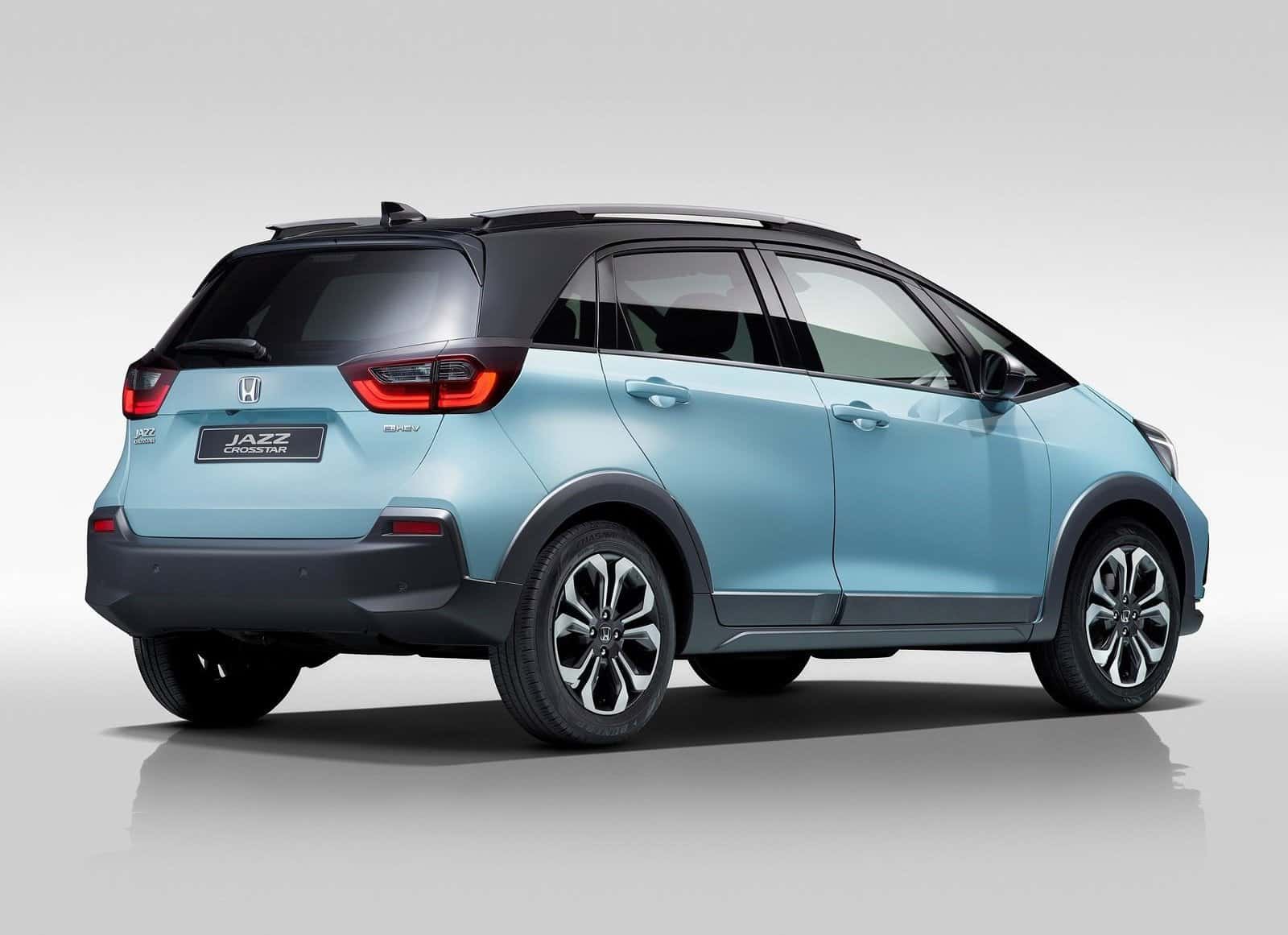 While no trim grades have yet been confirmed by Honda UK, it would be reasonable to expect UK cars to be available in S, SE and EX trim levels like the outgoing Jazz.

The interior of the Jazz has been revised with a large sweep of coloured material across the dashboard. The design of the centre console is clean and minimalist, while it appears that the Jazz will get a new two-spoke steering wheel similar to the one in the Honda e. A digital instrument cluster is expected to be fitted as standard. 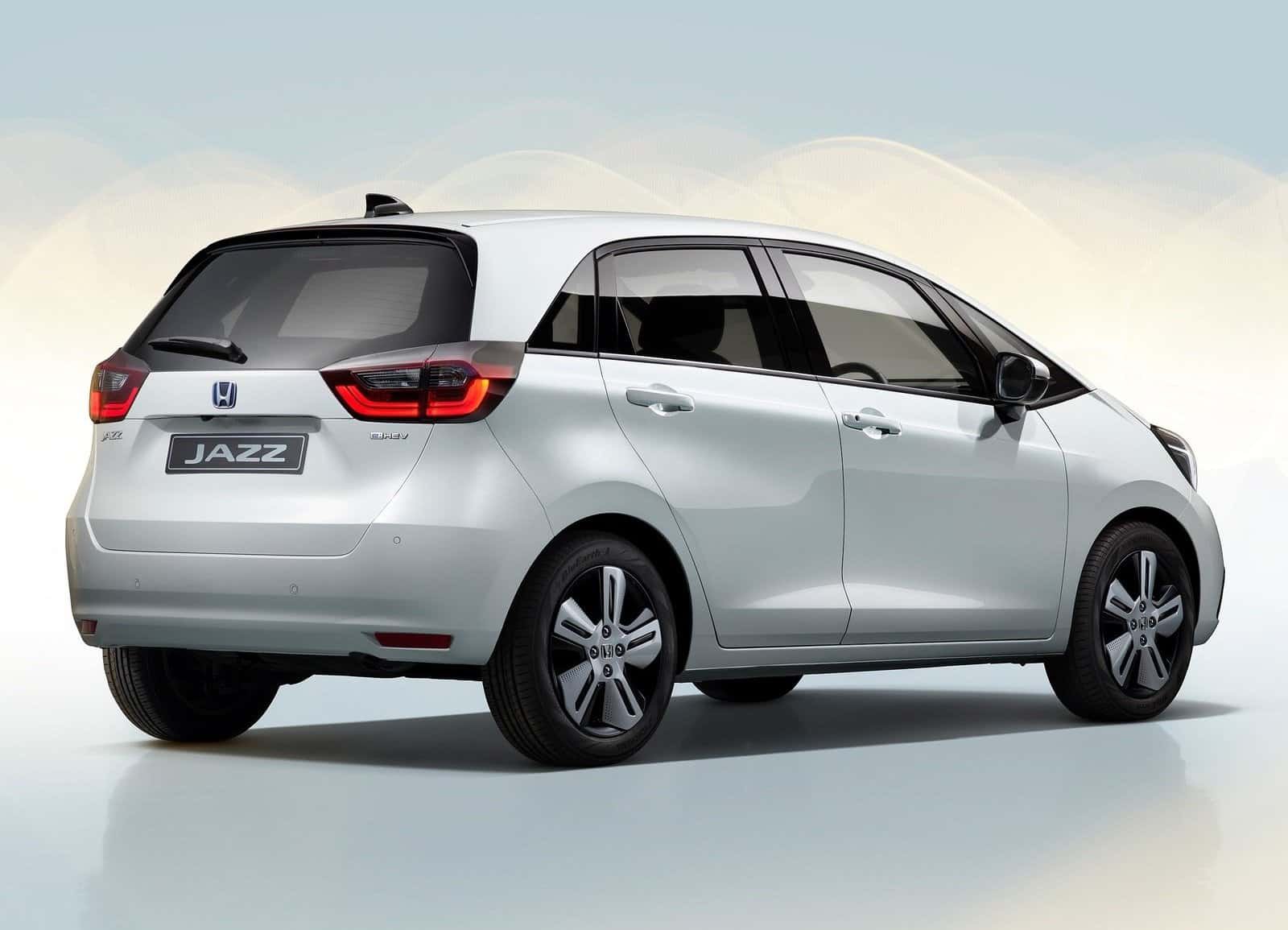 Honda has fitted new seats with extra cushioning, to prevent aches on long journeys, while a centre armrest is always a welcome addition. The window pillars are slimmer than those on the outgoing Jazz, helping to improve driver visibility. 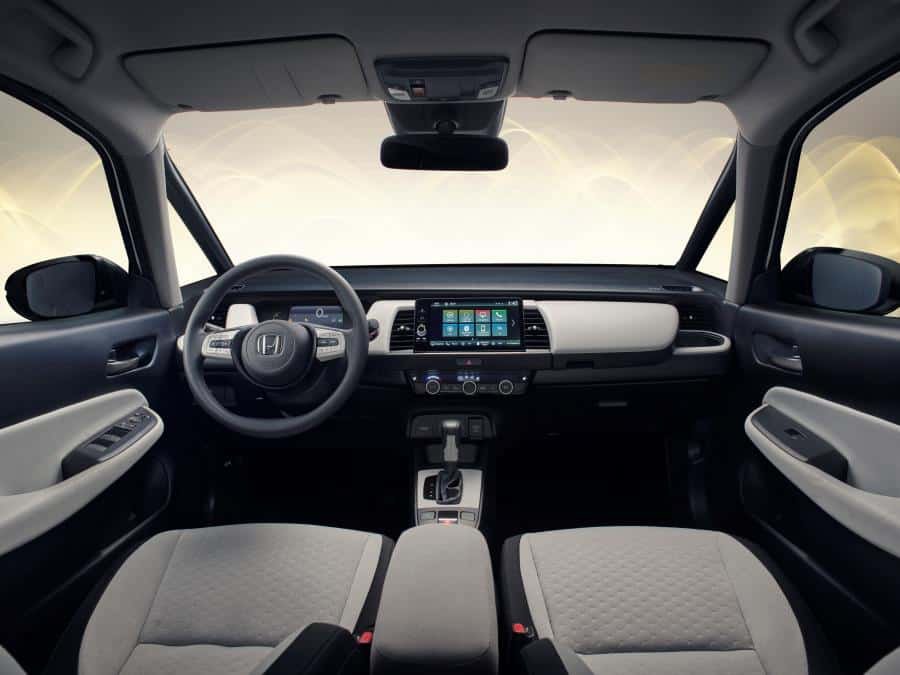 Practicality will also be improved in the new model. A slight increase in dimensions improves passenger and boot space, will make the new Jazz one of the most spacious superminis on the market when it arrives. Like previous cars, Honda’s rear ‘Magic Seat’ system will be fitted, meaning the rear seats can slide both forwards and backwards and the seat bases fold up like cinema seats if you need to carry tall or bulky items in the rear footwells. 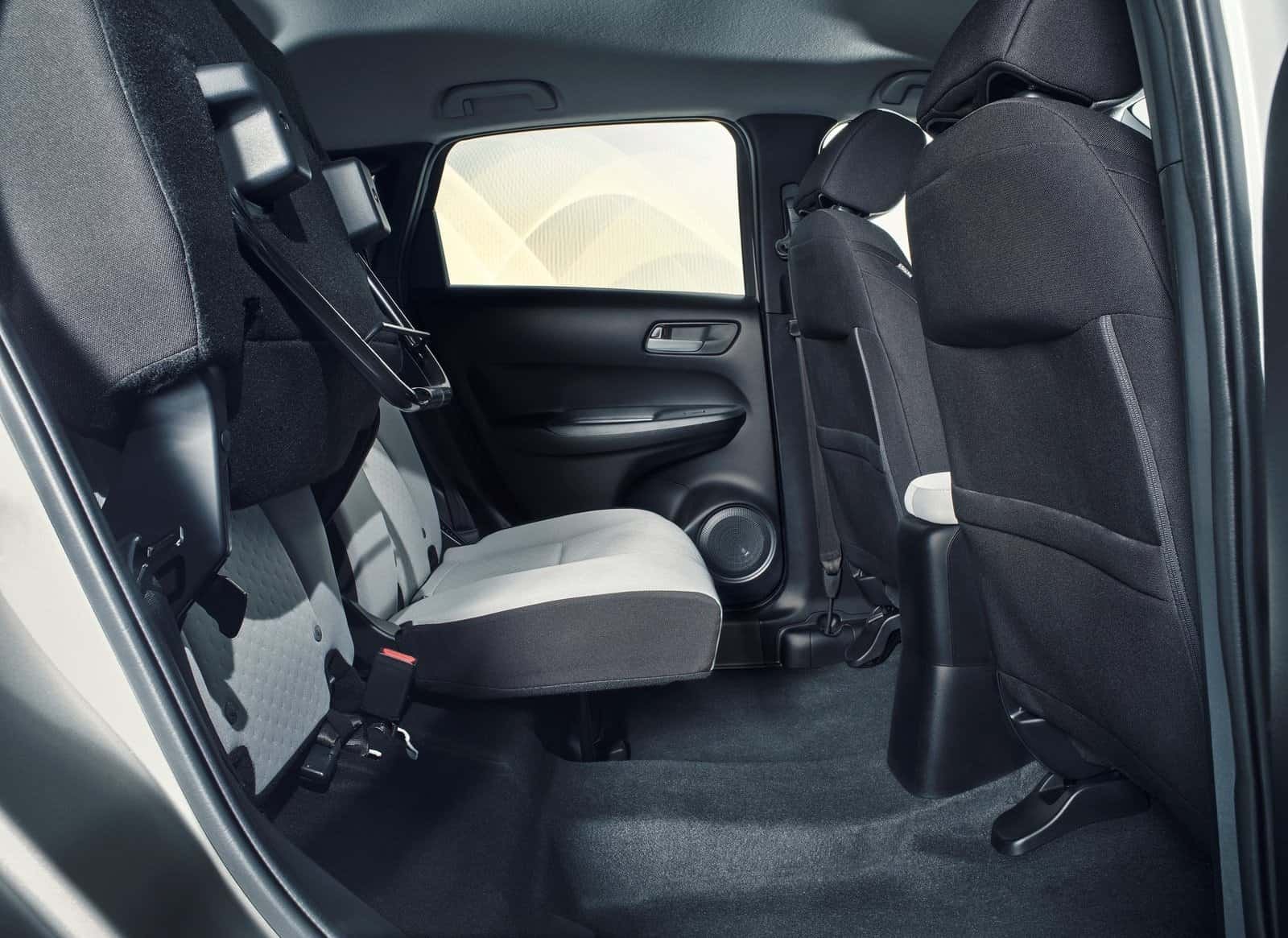 Due to the hybrid system taking up space under the boot floor, boot space in the new Jazz is reduced to 298 litres (previously 354) with the seats in place, or 1,203 litres with the rear seats folded (previously 1,314).

Recent improvements to ‘Honda Sensing’ safety package means the Jazz should be safer than ever. Its high-definition camera offers better perception of roadside markings and soft verges, while the autonomous emergency braking has a more advanced night-time function with pedestrian and cyclist detection. Adaptive cruise control and lane-keeping assist are available and the latter works on urban and rural roads as well as motorways.

Now in its fourth generation since the modern-day Skoda Octavia launch...

Specifications have been released for the KIA XCeed and Ceed Sportswag...